Wireless Boosters Are Really Useful, Letâ€™s Make Sure We Can Actually Use Them

What does it do? It boosts your phone’s wireless signal, up to as much as 20 times. From what we’ve heard, these little gadgets are pretty useful, drastically improving reception and reducing dropped calls for a fairly low one-time price (somewhere between $70 and $130 for the Wilson Sleek pictured above). Not only that, the boosters will work on nearly all networks, meaning you can buy one booster and have improved signal regardless of whose plan you’re on, or even share your booster with someone on a different plan. This is how boosters have always been designed, marketed and sold, and as such they’re starting to gain steam in the marketplace.

Of course, this FCC rulemaking has the potential to change all that, if the parties against boosters have their way. Boosters could become exclusive to individual networks, or worse yet, restricted from practical use entirely. Now, you may be asking yourself, who would have any interest in limiting consumer’s use of wireless boosters? 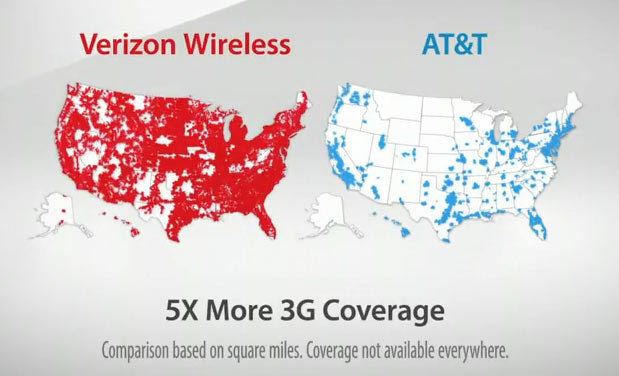 Above: Oh, these guys.  (Image source: the notorious Verizon attack ad that, incidentally, resulted in a messy lawsuit)

Imagine you’re a big, established wireless carrier. You find out that a little $70 gadget could give your (or your competitors’) customers working signals in areas where it would take thousands of dollars to build new cell towers. Of course you would want to control the use of these boosters; ideally, you’d want to keep them out of your competitors’ hands as well. Boosters threaten to undermine your business model: you’d want nothing more than for your little startup competitors to lose access to these boosters, even if it means letting nobody have them.

To be fair, the big incumbent wireless carriers have more than just anti-competitive motives behind their opposition to the boosters. There’s a legit motive too: if not properly maintained, the boosters have the potential to cause harmful interference, which would disrupt current services and hurt everyone. The key then is to address the interference concern in a way that preserves both the devices’ usefulness and competition in the booster market: that’s why PK and NAF wrote in support of extensive interference prevention measures within the device itself, such as a built-in mechanism for boosters to shut themselves down if they detect that they’re causing interference.

Our goal is to prevent harmful interference from boosters, while ensuring the boosters’ usefulness and making sure they can operate independent from your wireless service contract. We think that boosters have the potential to bring faster wireless services to consumers and revolutionize how we think about wireless service – if Verizon can’t sell you on their superior network coverage because everyone already owns a booster, they might offer lower prices, or new features, or anything else that consumers want.

However, we’ll only get to this world of universally expanded coverage if everyone can use boosters on any network. If each wireless carrier has to have its own brand of booster, the big wireless companies like AT&T and Verizon will likely sign exclusive agreements with booster manufacturers to make only their type of booster. Startup carriers (think Cricket) will find it next to impossible to get a booster made for their network at all. In the worst-case scenario, suddenly the booster, which should be a great market equalizer, is only made for the big guys. Little guys like Cricket now have to compete with the big carriers who not only have bigger networks but also provide their customers with boosters.

Interestingly, that’s kind of what happened with handsets like the iPhone: people signed up with AT&T to get the exclusive iPhone, and cheaper wireless startups who couldn’t provide customers with the iPhone lost customers. The big get bigger, the small get totally eclipsed. Hopefully with boosters, the FCC will learn from its past.